WAYCROSS–No. 7 Ware County used a throwback offense to amass nearly 300 yards on the ground to beat the No. 10 Knights 35-21 in a battle of ranked teams in Class 5-A Friday night.

Lead by senior quarterback Jemar Lincoln and an assortment of running backs, the Gators relied on the old Wing-T formation to gain 280 rushing yards, including a closing 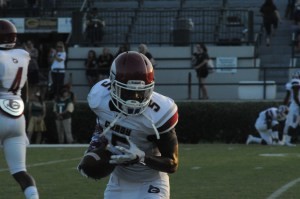 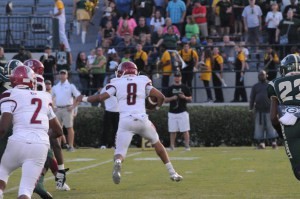 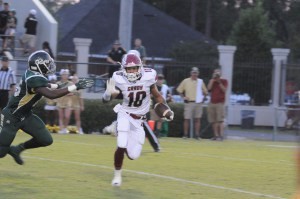 64-yard touchdown run by senior running back Gary Williams with 7:29 left that sealed the deal.

“We made a lot of mistakes. If we end up playing them again, it’s just about corrections,” said senior receiver Jacquez Sloan.

Both teams came out slow with the first quarter ending scoreless, but the Gators’ smash-mouth offense never wavered as they continued to put the ball on the ground. Ware County finally got into the end zone with 8:05 left in the second quarter after an 11-yard rush by Lincoln, which capped a 12-play, 73-yard drive. Ware led 7-0.

On Grady’s next drive, senior receiver Aaron Hudson grabbed a 21-yard reception on the first play, but the Knights were forced to punt. Ware fumbled the punt but recovered on its own 21-yard line. The Gators extended the lead to 14-0 on a 22-yard touchdown pass to senior receiver Olajuwone Smith with 6:08 left in the second quarter.

“They were a team that was able to capitalize on our mistakes,” said senior defensive end Theron Anches. “We beat ourselves. We should’ve won.”

The Gators tried an onside kick,  but the Knights recovered  and responded,  getting on the board after a 3-play, 51-yard touchdown drive highlighted by a 51-yard touchdown pass to Sloan on 3rd and 10. The touchdown cut the lead to 14-6 with 5:26 left in the half as Grady missed the extra point kick.

With 2:12 left in the half, senior quarterback Caylin Newton led Grady down the field quickly, highlighted by a 38-yard pass to Sloan. However, the Gators’ defense got to Newton on 2nd and 7 from the 11-yard line to put the Knights in a 3rd and 19 situation.

With an incomplete pass  intended for Sloan and the clock ticking, the Knights went for it on 4th and 19, but we’re unable to capitalize after Newton’s pass was a little too low for 6-7 senior tight end Kemari Averett.

Grady senior Avante Ross forced a fumble on the opening kick of the second half, which  senior  Christian Jones recovered and returned to the Grady 27-yard line. Five plays later, Averett grabbed a touchdown pass on a fade route to pull the Knights within two points. Grady tied the score at 14-14 with a 2-point conversion with 9:26 left in the third quarter.

A key momentum changer came on the next kickoff as Ross forced another fumble,  which he seemed to recover himself, but the referees determined Ware County had the ball.

“It was a strip,” said Ross. “I stripped the ball and fell down with it in my arms. I had it.”

The Gators took full advantage of the miscall with a 33-yard touchdown pass to cap off a 7-play, 72-yard drive to take a 21-14 lead with 5:48 left in the third quarter.

Grady couldn’t carry its previous momentum to the end zone, stalling in Ware County territory and punting to the Gators who set their Wing-T in motion again with another long drive on the ground. The Gators went up 28-14 after a sneak by quarterback Lincoln at the 10:37 mark of the fourth quarter.

The Knights weren’t going without a fight.

They responded with a 6-play, 66-yard drive to the Ware County 4-yard line, but senior running back DiMarcus Clay fumbled at the 3-yard line, giving the Gators possession again.

“The little things have a domino effect and lead to big things,” said coach Earthwind Moreland.

It only took the Gators three plays to score again and go up 35-14 with 7:29 left. The Gators quickly gobbled up 97 yards, which included a 32-yard pass on the second play of the drive and running back Gary Williams’ 64-yard, third-down touchdown run.

Both teams went scoreless on their next drives, but Grady wasn’t done yet. The Knights put together a 5-play, 73-yard drive that ended with a 45-yard touchdown pass to senior Cincere Mason.

But it was too little, too late.

With both teams in Class 5-A, it’s possible  they could meet again in the playoffs. Moreland said there will be no surprises if the teams cross paths again.

“What they do isn’t going to change; I can guarantee that,” said Moreland