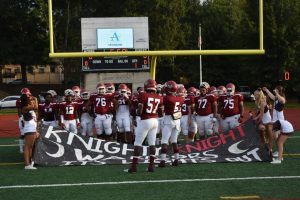 Atlanta, GA – Friday September 20 was Cluster Night at Grady Stadium, and a large crowd of current and future Knights supporters were treated to a thrilling 45-42 overtime victory over Lithia Springs. The victory, the second in a row for Grady, was sealed by a 29-yard field goal in OT from Reid Schratwieser.

The snapper on the game-winning field goal was QB Aquinas Stillwell, but it was far from his only contribution of the night. Stillwell completed 19-30 passes for 464 yards and three touchdowns in addition to an 85-yard blocked field goal return, two pass break-ups, and three tackles on defense.

Stillwell’s favorite target on the evening was WR Nathaniel Wiggins, who caught 7 passes for 203 yards and 2 touchdowns. Alvin James also caught a TD pass from Stillwell, and Canaan Brant balanced the air attack with 2 rushing touchdowns.

On defense, Grady was led in tackles by Jumal Prothro with 10. Jason Nolton and Devin Bunker pitched in with 8 tackles each. Amari Little had 6 total tackles, including 2 sacks and 2 tackles for a loss, one of which caused a fumble. Finally, Marvin Wiley notched 4 tackles and one blocked field goal which led to a score.

Grady will look to continue its winning streak Friday, 9/27 on the road against Region 6-AAAAA opponent Decatur High School. Kick off is set for 7:30pm. For more information and updates on Grady Football and other programs, follow the Knights all year on Twitter at @GradyAthletics.