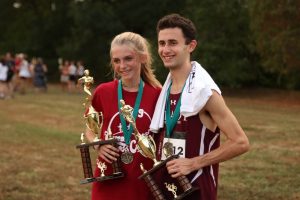 Atlanta, GA – Grady’s Boys and Girls Cross Country teams both won first place at the APS City Championships on Tuesday, October 8. The meet in Grant Park was run in the coolest weather of the season so far, and Grady took full advantage of the more comfortable conditions, turning in a dominant performance when it counted most.

For the Boys it was Bram Mansbach and Kavi Jakes finishing first and second, respectively. Mansbach posted the fastest Grant Park time of the year at 17:18, while Jakes crossed the finish line ten seconds later with a strong 17:28.

Grady will compete Saturday, October 12 in the Pickens County Invitational before moving on to face its biggest challenge yet, the Region 6AAAAA Championships on Thursday, October 24 at Boundary Waters Park in Douglassville.

For more information and updates on Grady Cross Country and other programs, follow the Knights all year on Twitter at @GradyAthletics.