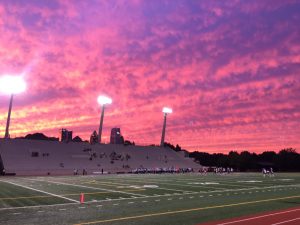 Atlanta, GA – The Varsity Football team put the exclamation point on a festive Homecoming Week at Grady with a decisive 40-0 victory over the North Springs Spartans. In front of returning Grady alumni and a colorful sunset, the Knights scored early on a long touchdown pass from Aquinas Stillwell to Nathaniel Wiggins and never looked back.

Stillwell threw for a second touchdown, rushed for another, and returned interceptions for two more. In addition to his opening TD reception, Wiggins caught a second and returned the opening kickoff of the second half for his third touchdown on the night. On defense, Camari Benning led Grady with 11 total tackles followed by Amari Little with eight, including four for a loss.

Grady plays next on Friday October 25 at 8:00 vs. Maynard Jackson. The game will be a home game for Jackson but played at Grady Stadium.

For more information and updates on Grady Football and other programs, follow the Knights all year on Twitter at @GradyAthletics.