Atlanta, GA –  Grady’s newest Varsity sport doesn’t require a ball, stick, or helmet. Instead, players use computer monitors, controllers, and headsets. It is esports and after years of competing as a club, 2019-2020 will be Grady’s first season competing at the GHSA Varsity level. 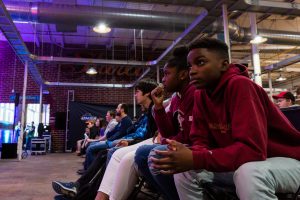 With over 400 million fans worldwide and more than 200 colleges and universities offering almost 15 million dollars in scholarships, esports is one of the fastest growing professional and amateur sports in the United States. There are now eight states offering competitive video gaming as a high school sport (Georgia joined in Fall 2018) and that number is sure to grow in the next few years.

“I am very excited to be a part of the inaugural season of esports at Grady,” said team member Luca Ptacek. “I hope everything goes great so this program can succeed for the future and provide an opportunity for upcoming students who are interested in esports to be involved in the Grady community.”

Esports officially stands for electronic sports, not to be confused with video games. Esports takes video gaming to  another level with organized competitive gameplay between  two teams, governed by its own strict set of rules  and guidelines. The difference is comparable to a pick-up  basketball game at a park versus a varsity high school  basketball game. Esports requires teamwork,  communication, critical and strategic thinking, creativity,  sportsmanship, and leadership — much like traditional  sports. Grady teacher Nikolai Curtis will serve as the team’s head coach.

Like any other high school sport or extracurricular activity, team members will attend team meetings, practices, and official matches. Grady will practice and play all its matches at Axis Replay, a high-tech entertainment and event facility for video games and esports located up the Beltline inside the Stove Works Building across from Krog Street Market. Through the official partner platform of esports, PlayVS, students can compete in teams of five for League of Legends and SMITE, and teams of three for Rocket League. Matches are held on Tuesdays or Thursdays beginning October 29 and each school year is divided into two regular seasons, Fall and Spring, each with their own playoff season.

For more information and updates on Grady Esports and other programs, follow the Knights all year on Twitter at @GradyAthletics.