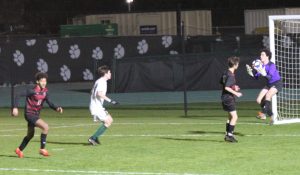 Under the direction of a new head coach, Jaime Benedetti, the varsity boys soccer team optimistically begins their season after a preseason scrimmage game win against Westminster. Grady won 1-0 with a score by Hudson Askins a few minutes before the end of the friendly game on Thursday evening, January 30th. The varsity boys soccer team invites everyone to their season opening games at home on Tuesday, February 4th at 5:30pm against Woodward and on Friday, February 7th at 7:30pm against Marist. The jv boys face Woodward on Friday, February 4th at 7:00pm and Paideia on Thursday, February 6th at 5:45pm.  Come see what the new hype is about!