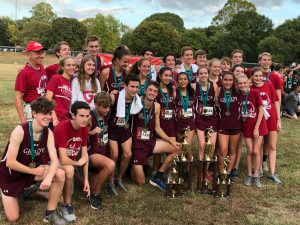 The Grady Cross Country team will open up its 2020 season on Saturday September 5 in Cartersville at the Run at the Rock Invitational, hosted by Woodland High School. The meet is scheduled to start at 8:00 AM and marks the first opportunity for the Knights to compete against other schools after nearly three months of summer training.

“The kids have been putting in many miles of training both together as a team and individually as they have isolated themselves all spring and summer,” said head coach Jeff Cramer. “We are just happy to be able to line up and race after so much uncertainty this year.”

As usual, the Knights plan to field strong Boys and Girls teams this year. According to Coach Cramer, the girls only lost one runner to graduation and, even though five of the top seven boys graduated last year, there is a dedicated group returning from JV ready to step up. “The strength of each team is their ability to run together as a group in training and racing. We never plan to have one or two stand out runners, but to have seven top athletes who will finish within a few places of each other so the team can score well against the field.”

The Knights schedule will look a little different this year with fewer metro Atlanta meets due to COVID-19 restrictions, but the teams are still expected to compete in a number of strong invitationals in preparation for the Region 6AAAAA Championships on October 24 and the GHSA State AAAAA Championships on November 7.

For more information and updates on Grady Cross Country and other programs, follow the Knights all year on Twitter at @GradyAthletics.